Three Things You Must Know About Diabetes in Singapore

In conjunction with World Diabetes Day (14 November), here are three things you must know about diabetes.

According to the International Diabetes Federation (IDF), 1 out of 10 Singaporeans aged between 20 and 79 have diabetes. At age 65 and above, this number rises to an astounding 1 in 3. 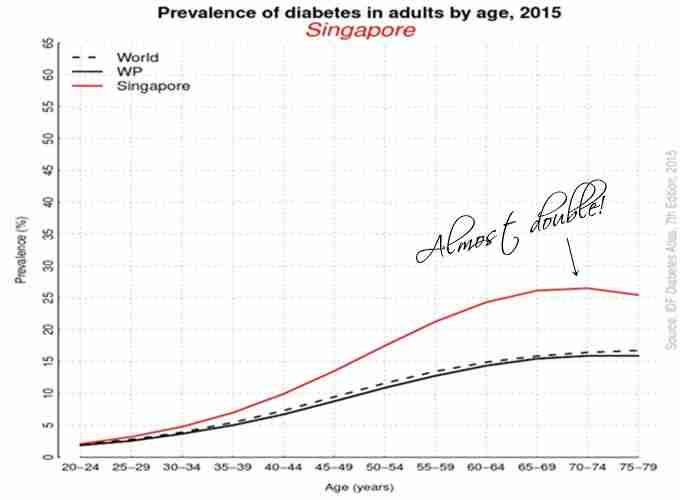 The rise of diabetes in Singapore is a growing concern. Without any intervention now, these numbers are set to rise to close to 1 million by 2050. The increasing prevalence of diabetes, which is one of the biggest expenditures of our health care system, has led Health Minister Gan Kim Yong to declare ‘war’ on the medical condition. 02 | 1 in 3 diabetics were unaware that they had diabetes

Of the more than 400,000 diabetics in Singapore, 1 in 3 were unaware that they had the condition.

If left undetected, untreated, or poorly managed, it is a debilitating condition that has severe life-long consequences. It can lead to a series of serious complications such as heart disease, stroke, kidney failure, blindness, and lower limb amputations.

In Singapore, four lose a limb or appendage every day due to complications from the medical condition.

03 | Type 2 Diabetes Can Be Prevented

Over 90% of diabetics suffer from Type 2 diabetes, which is a largely preventable condition.

Type 2 diabetes is a lifestyle disease that results from the way we choose to eat, move, and live. Lifestyle factors such as physical inactivity and poor diet leads to obesity, which causes insulin resistance. Insulin resistance results in glucose being built up in the blood stream, instead of being absorbed and metabolised by the body for use.

Evidence has shown that by increasing our level of physical activity, improving our diet, and keeping to a healthy weight, Type 2 diabetes can be delayed or prevented. What You Can Do Now

01 | Become Familiar with the Symptoms of Diabetes

Knowing the symptoms might just help someone you know receive timely treatment. Early intervention is important in improving the quality of life of an individual with a diabetic condition.

02 | Are You Exercising Enough?

In the Finnish Diabetes Prevention Study and the Diabetes Prevention Programme, changes in dietary intake and physical activity have been shown to reduce risk of diabetes by 58%. In a Chinese study, exercise alone was found to be effective in reducing the risk of Type 2 diabetes.

To ensure that you are exercising enough, check that you are fulfilling the physical activity guidelines for your age group. In general, adults between 18 to 74 should engage in 150 minutes of moderate intensity, or 75 minutes of vigorous intensity aerobic activity per week. Muscle strengthening exercises should be performed at least twice a week.